Last week, Google announced an upcoming product called Wave which the tech giant refers to as “what e-mail would look like if it were invented today”. By that they mean a communications system with all of the acquired knowledge of the 21st century without the hangups of the 20th. For detailed info you should really check out the official Google Wave site, but I’ll try to keep the pre-required knowledge to a minimum here.

This isn’t a tech site, it’s a film site. So what on earth does this have to do with cinema? Google is inventing this to revolutionize communication and productivity which has essentially been stagnant for decades if not longer. E-mail, as one example, is sent back and forth between one or more people just as the letter or the memorandum was before before it. Wave basically breaks that wide open, offering contextual live editing of a single communiqué. Now, while this can certainly help in producing a film just like it could help any general office task, the overall Wave concepts could be applied on a grander scale for filmmakers.

The Way Things Are

The movie-making process has remained largely unchanged in over a hundred years. Think about it. While technology may have advanced the way we do things, it hasn’t really affected what we are doing. Let’s take a look at the snappy chart below. This is the basic process of filmmaking as it is today the way it has been for decades. Please note that this sample applies to both film and digital workflows. I use the verb “process” below to mean any step that is required to get footage to an editable state. In the tapeless world, this means file copies, transcodes, logging, etc. For now, we’ll work with film for the purposes of discussion, but we’ll get to digital acquisition in a bit.

Whether you are making a low-budget documentary or a Hollywood blockbuster, these steps are all required. You go somewhere to shoot your subject. The film is processed at a lab, then color corrected and put onto video tapes, which are then dubbed to any number of formats depending on how many people need to access your footage. This is key, the more people who need to access the footage need a physical copy of it. The tapes are then captured into an editing system and cut together. The final step, listed above as “Finish”, encompasses all of the steps required to get the piece viewable for an audience. Touching up picture, tweaking color, negative cutting, digital intermediate, and film printing are just a few examples of this last leg of filmmaking.

In general, these steps all happen in different places and are performed by different people, which brings us to the fancy chart above. I have trimmed it down to deal with only a few of the behind-the-scenes players. There are so many people involved in making even the shortest of projects, this is barely a cross-section. If you’re shooting a film in Prague, processing footage in England, and cutting in New York while executives in Los Angeles are looking over your shoulder, you will start to see where this process starts to break down. Not only is it a great challenge to keep so many people (often in many languages) on the same page for the duration of a production, but you also introduce a number of points of failure. Any time the project moves from space to space, there are more opportunities for things to go wrong. Film gets lost, damaged, cut incorrectly, etc.

So how do we fix this? Well, the same way any other business does, with a whole bunch of paperwork and accountability. E-mails and forms and databases are used to keep track of everything along the way, but these kinds of systems are a safety net. They don’t enhance the process, they simply make it so that when things break down you can find where the weak spot is hidden. How can we change the way we make films in a manner that can boost not only productivity but creativity? I believe we can look to Google Wave for some of the answers.

The Way Things Could Be

Google is trying to get users to wrap their heads around this idea of a wave, which is basically the digital equivalent of a white board. In the wave, you can write correspondence, view documents or pictures, incorporate data from other web sources do all kinds of other things that would be available to a group of people sitting around a conference table. Let’s take that idea of a blank space in which a group can do productive work together and focus on it. I think it’s time for another chart. 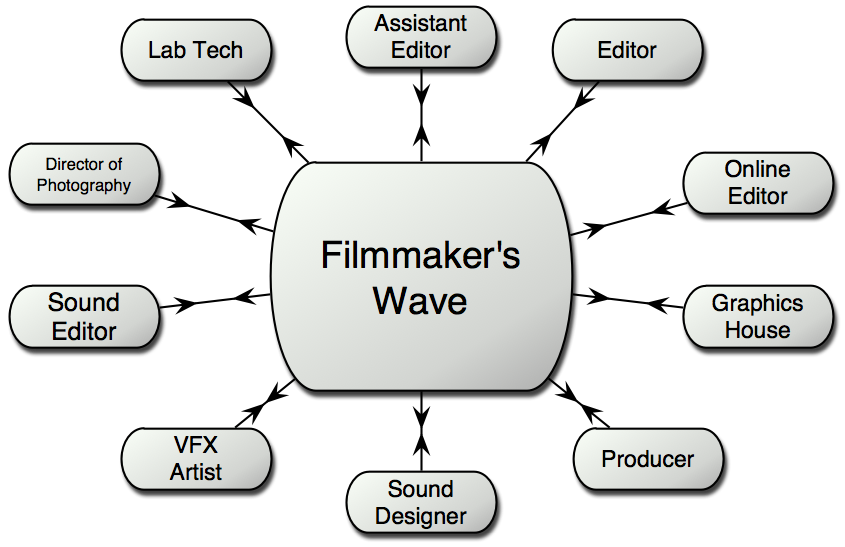 Holy crap! That chart is brain-frying awesome! So many branches, you probably don’t even know where to start. It’s simple, every job and step passes through the wave. To try and explain this insanity away, I’ll use a more modern tapeless workflow, such as the Red camera. This particular camera shoots 4K raw digital files onto either a hard drive or a flash card. Currently, no system is able to play back the raw media at full resolution, so it must be transcoded to something else. There are many different ways to work with any uncompressed tapeless format, but at least one part of the process is going to be arduous, requiring some heavy lifting on the part of the computer. Let’s not waste time on the specifics of these workflows though, let’s look to the future.

Imagine a wi-fi enabled camera that can shoot the raw media to a local drive and then instantaneously upload a smaller version of the raw file to a server. This will of course require faster networks than we have now, but roll with this idea for a moment. Within moments of being shot, the media is visible and editable in a web browser. An editor can be on set or in an office half way around the world and begin trimming shots down, logging them, and marking them as good or bad. As more media comes in, the editor could begin cutting whole scenes together. At the same time, the cinematographer could have access to the editing server and view some of the cut scenes to ensure his eye-lines are correct. The director could see if any creative changes need to be made. Producers in LA could send notes instantaneously. All of this could happen within the same wave at the same time, theoretically.

Not all of this is possible yet. We simply don’t have fast enough networks or computers to get this all running. Once 64-bit processors and operating systems give way to 64-bit applications, the floodgates will open for some of these heavy lifting processes. Even so, the basic precepts of digital editing could actually be done over a network today. When you make a cut in any digital editing software, you are not actually cutting the high resolution video. Instead, you are actually just telling the application where to make a cut or add an effect. Think of this as a long, lightweight text document that is listing various points where edits need to be made.

Google Wave is currently built to facilitate all kinds of text editing, namely e-mail and chat. If you look at that text document with all of the edits as our core project, you should be able to edit those ins and outs over the internet. But what about the actual footage? In Google’s demo, once one user dragged photos into the wave, a preview of the photos appeared in another user’s wave before the full resolution files were uploaded to the server. This same idea could work for video. A lightweight video could be viewed across a network while the larger files would all be stored on a server somewhere else. Better yet, any and all changes could be saved and stored, listing who made the changes and when.

When it comes to finishing the film, or really doing any kind of heavy lifting that requires the original files, the edits can be taken off the network and re-linked to the master media. This is already a method in use with non-linear editing, but the key is to take the actual editing of the lower resolution media off of a single system and putting it into a wave. Reverting to yesterday’s cut would be a single click away.

Why go to all of this trouble?

Cinema is a collaborative art form. A single film requires hundreds of people to work in tandem before it will see the light of day. Why do you think the credits are so long in movies? I like to think that this collaborative nature of filmmaking enhances the final product rather than hindering it. Even when it things really ugly, (a writer butting heads with a director, a producer recutting a film unknowingly) some pretty amazing films can come together because of creative confrontations.

As I said earlier, so many people are working in so many different places with one common goal in mind. Why not move the tools needed to achieve that common goal into the same space? I realize that there is such a thing as too much collaboration. The biggest fear of such a system is that too many people will have access and you’ll cut eighty different version of the same film, all of which are horrible. Well, maybe, but I bet it would be pretty easy to control such a system.

For some productions, the wave will only be accessible to a select few, and maybe some of them don’t have full access privileges. Editorial will be able to edit in one office while a producer is only allowed to leave notes on the file, which can be accessed by everyone. Other productions, maybe a documentary shooting in Africa with an editor in Louisiana, would rely on a deep level of collaboration. Director and editor could be working together over the internet a little bit at a time. Even more to the extreme, director and editor could not even know each other while working together through the web.

There are innumerable ways to make this work for anyone. The technology is not there yet, but we know that it will be. Google is releasing Wave as an open source application that can be installed locally, meaning it’s free and can work on your own hardware. The Big G is specifically asking people to come up with innovative ways to take advantage of the technology they have on offer. In time, I believe that the film community will benefit directly from this concept. In the meantime, keep making beautiful movies the same way you have been for so long.

This article was written to open up new ideas about this software. It is a concept based purely on a single demonstration of an early build of an application. If you like what you see, or do not like, I encourage you to start discussion in the comments. I am putting a Creative Commons Attribution- Noncommercial-Share Alike 3.0 License on this, which applies to everything written on the candler blog. I hope that this will stimulate more ideas for making movies in our Web 2.0 culture. To discuss specific ways of implementing a system like the one described above, please leave a comment saying as much and I will get in touch with you. Wave developers, let’s have a conversation about the probability of such a system. Thank you.