As a writer in the digital age, my tools are ever changing. I am “that guy” who buys just about every app known to man in hopes of finding a better workflow1; an easier way to translate my thoughts into workable text. Personally, I see no reason to be terminally locked into a single method. Projects and needs change, so too do the tools that help us get things done.

Recently, the software developers The Soulmen released Daedalus Touch, a plain text editor for the iPad that tries to harness the strongest aspects of touch-based interfaces while keeping their main focus on that one most basic and important task: writing. Gone is the file system and list of available documents. Daedalus tries to make writing on the iPad as un-computer-like as possible. Borrowing Apple’s parlance, the app’s marketing materials tout it as a “post-PC” text editor. It fulfills that role by introducing a (sort of) new paradigm for working with text known as the paper stack.

When you launch Daedalus, you are presented with “stacks” of papers. Each one, in PC terminology, is basically a folder. Swipe left to right to see as many stacks as you have created. Pinch out on a stack and you will reveal all of the “sheets” or documents (if you must) contained therein. Instead of a filename, each sheet features two areas of input: one for your title (which then acts as a filename on your computer) and one for your content. Swipe left to right to see all of your sheets, which extend infinitely toward the bottom of your iPad screen so you can see each one’s full contents. Tap, hold and drag a sheet to re-order your stack to your liking. The interface is extremely slick. It feels like an iPad app, more so than any other text editor that came before it. 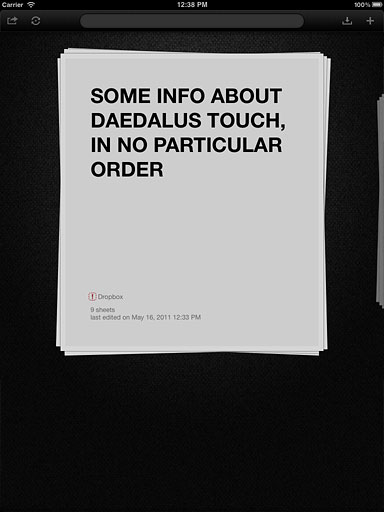 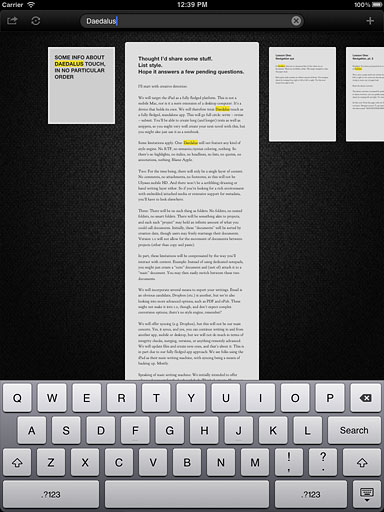 A Quick Word on How This Isn’t a Ulysses Port

There is a steep learning curve to Ulysses, The Soulmen’s flagship OS X text editor. From the moment you open it up, it feels like a foreign environment. It has multiple panes for notes and file organization as well as a unique approach to text formatting dubbed “semantic editing.” What has always caused me to balk every time I have tried to use it is that it feels like it needs to be managed. It doesn’t invite me to write, it tells me to get my thoughts under control.2

Daedalus Touch is the exact opposite. Established OS X developers like The Soulmen might be tempted to “port” their application to iOS. (Their website features a grayed out logo for “Ulysses Mobile” with the message “On hold.”) Thankfully, they resisted that impulse. Though Daedalus Touch features many of the hallmarks of Ulysses, (cross- document search, project organization, mostly fullscreen editing mode, etc.) it is a brand new concept from the ground up. Launching Daedalus Touch invites you simply to write. Organization be damned! Writing should be simple; the “page” should be available whenever you think to write.

Syncing can be done through Dropbox or MobileMe. I don’t have a MobileMe account so I was only able to test out Dropbox sync. Syncing works a bit differently than it does in Elements or Plaintext. You have to sync each stack separately, and you always have to initiate it with a button. There are up sides and down sides to this.

The good news is that since each stack syncs separately you can sync each with a separate folder in your Dropbox. Though Daedalus comes preconfigured to create a new Daedalus folder at the root of your Dropbox account, you can use any folder available3 at the root or below to sync any stack. As much as I love Elements, its single folder sync becomes unwieldy and messy over time. Not all of my projects belong in the same place.

The other thing that manual sync has over automatic sync (on launch or edit or both) is that you tend to be more in control of files when you are required to initiate the sync. One unexpected automatic sync can throw everything out of whack. Many times, I have been in spotty 3G areas, launched a syncable app to make a note, and had the whole thing error out because it can’t actually connect to Dropbox. Meanwhile, all I wanted to do was make a quick note. The manual sync scheme alleviates that problem.

However, syncing has to be turned on and configured for each stack. You don’t have to log in to Dropbox every single time, but you first have to turn on syncing, change the upload path if you like and then hit “Sync Now” to get your media up to Dropbox. After that, it’s a single tap to upload/download changes, but if you are going to be creating a lot of stacks (that need syncing) then you will have to go through a slight rigamarole the first time out. 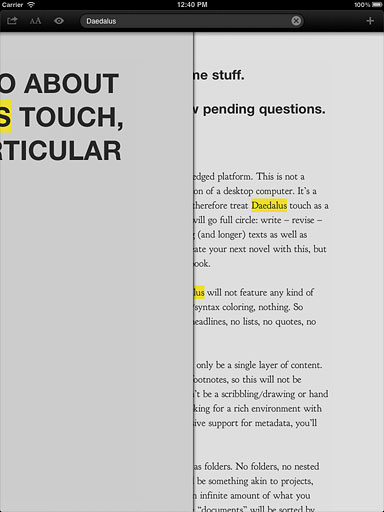 The top of the screen features all of your toolbar buttons as well as the search bar. Unlike in Elements, the icons on the top bar are extremely low contrast. You can hardly notice them there while you’re typing, which is a very nice touch.

Whether you’re in sheet or stack view, you can initiate a search with the ever-present search bar. It will quickly scour the text in all of your sheets. Results are highlighted in yellow and start popping up as you type in the search bar. Sheets without any relevant matches fade to the background. Pinch out to stack view, and stacks with matching text feature a yellow stamp denoting how many matches lie within. It’s fast and useful, but note that the search isn’t 100% accurate yet. A quick search for the word “the” highlighted any word containing those characters, like “their” and “there”. Then again, searching for “the” is idiotic; most searches should yield acceptable results.

While you can’t adjust your font size or margin width, The Soulmen have provided some nice visual options for the typing screen. For colors, you can choose from Dark (white text on a black background), Light (black text on a white background) or Sepia (black text on an off-white background). Font stylings come in three varieties as well: Classic (Helvetica for stack names and sheet titles; Goudy Bookletter for sheet contents), Modern (titles and contents are the sans-serif font Ubuntu) and Mono (all Inconsolata). All around, the font choices are nice and crisp.

It would be nice to be able to pick from the full range of available iPad fonts, but I rather like the font choices that are built into Daedalus Touch. Plus, their terse system makes it easier to just pick one setting and move on to writing. I’ll admit to having spent far too much time picking a font and tweaking the colors in other apps. The absence of choice here actually feels like an advantage. Still, maybe you don’t like to be limited, especially to a single font size, in which case there are a number of other text editors that would suit your needs.

Silly as it may seem, while you are typing in any document, your text sits atop a very light, almost unnoticeable baseline. (It disappears when you are only reading a document.) Though it may seem just a visual flourish, there is something nice about having that line there instead of looking at text floating in space; it gives your “paper” a bit more weight, makes it feel a bit more tangible. Functionally it offers nothing, but it’s these fine-tuned bits that make Daedalus Touch a pleasure to spend some time in.

One thing many iOS plain text editors have been adding en masse is the ability to easily write and preview Markdown formatted documents. Some apps add an extra row of keys to the keyboard to support the specific Markdown syntax, while others simply build in a Markdown parser, allowing for previews or exports of the formatted text. I write in Markdown, and while these features are usually a nice luxury, they aren’t necessary.

Two things alleviate the need for built-in Markdown support. The first is the inclusion of TextExpander. If you use TextExpander on iOS, then you should go get Brett Terpstra’s excellent Markdown Snippets for iOS. This makes it blindingly simple to type Markdown without any extra keys and even takes advantage of your device’s clipboard.

The other thing that The Soulmen have included is a very clever option in their export settings to open the current sheet in any other iOS app that supports plain text. This means that you can write in Daedalus Touch in Markdown, then send it to Elements to further work on it or preview in HTML. You can export documents to Pages where you can start formatting with rich text. You can even export to OmniOutliner, where each paragraph will become a bullet. This feature alone has made Daedalus Touch my go to app for writing. If I’m missing a feature, it’s only two taps away in another app.

The export function also works on whole stacks. If you export a stack, you have the option to open it as a zip in another app, like GoodReader, or e-mail it as a zip archive or as separate text files. You can also e-mail multiple sheets as text in an e-mail. There are a lot of ways to get your files in and out of Daedalus Touch, so there is no need to worry that your work is stranded on an island.

Notes on a Changing Workflow

My iPad to Mac via Dropbox workflow previously involved syncing documents from various Scrivener projects to syncable folders. This worked well, but it introduced a naming structure that added a layer of abstraction to my work. All of Scrivener’s synced documents have to go in a folder called “Draft” regardless of what the project is called. Each document is appended with a number and, for sanity’s sake, it is best add a numbered prefix to each document so that files are listed in the same order on your iPad as on your Mac. These little things have started to get to me over time; it’s no fun to look at my documents in a text editor anymore.

Daedalus’s gorgeous interface was muddied up the second I tried to sync a Scrivener folder into it. The titles didn’t make any sense and the stacks kept being named “Draft.” So I decided, starting with this review, to change things up a bit. Now I’m just using these text documents as text documents on my Mac. Thanks to Dropbox’s intuitive syncing, I no longer need to set up a sync to work the documents I keep on my iPad (as is required with Scrivener.)

There’s more to how I’m keeping organized and working with my documents, but that may have to wait for another post. I only bring it up because using Daedalus Touch instantly made me want to change my workflow, hopefully for the better. That’s a rare (and potentially dangerous) thing, but I must say, so far I am smitten with this app.